This wasn’t meant to be a farewell drive, but in between testing the 2022 Hyundai Veloster N and the publishing of this review, Hyundai announced that the spunky, three-door hot hatchback is dead. There will be no 2023 Veloster. Period.

It’s a tough one to take, as the Veloster N introduced us to what is now a blossoming performance brand in Hyundai’s portfolio. With it, Hyundai finally proved that it could make a top-tier performance car. The N division has since struck gold a couple more times with the Elantra N and Kona N, but only the Veloster N birthed the brand in the United States back in the 2019 model year. And sure, 2019 seems like 10 years ago to most of us, but in car terms, a mere four model years (counting 2022) is not a long life. At least they were four lovely model years.

For the final drive, we’re ending where we began, with a six-speed manual-equipped Veloster N. Hyundai added a dual-clutch automatic transmission for the 2021 model year, and we found it to be a good option for the auto-inclined. The DCT is also available for this final 2022 model year, which means it gets a two-year production run. However, nothing could make us happier than spending the last drive in this car with the neat-shifting manual.

It doesn’t take long to slip back into loving the Veloster N. Swing the extra-long driver door open — it’s massive, like that of a two-door coupe — and the super-high bolstered N seats await. These seats are the “N Light” sport seats (the N in the backrest literally lights up at night) introduced for 2021, and they help to spruce up an otherwise back-to-basics cabin. The Performance Blue accents for the massive steering wheel drive mode selector buttons beckon your activation right away. One tap on the checkered flag button, and the car switches into N mode, opening the exhaust up and activating the hilarious pop-and-bang soundtrack.

The rest of the cabin, except for the Performance Blue seatbelts, is almost brutally basic. A Honda Civic’s interior is far from luxurious, but it’s upscale compared to the materials and design you find inside the Veloster N. That’s not to say the Hyundai’s simple nature is a bad thing — prioritizing performance over luxurious interior materials isn’t a decision we take offense to. Plus, if you really need a nicer interior, the Elantra N awaits. 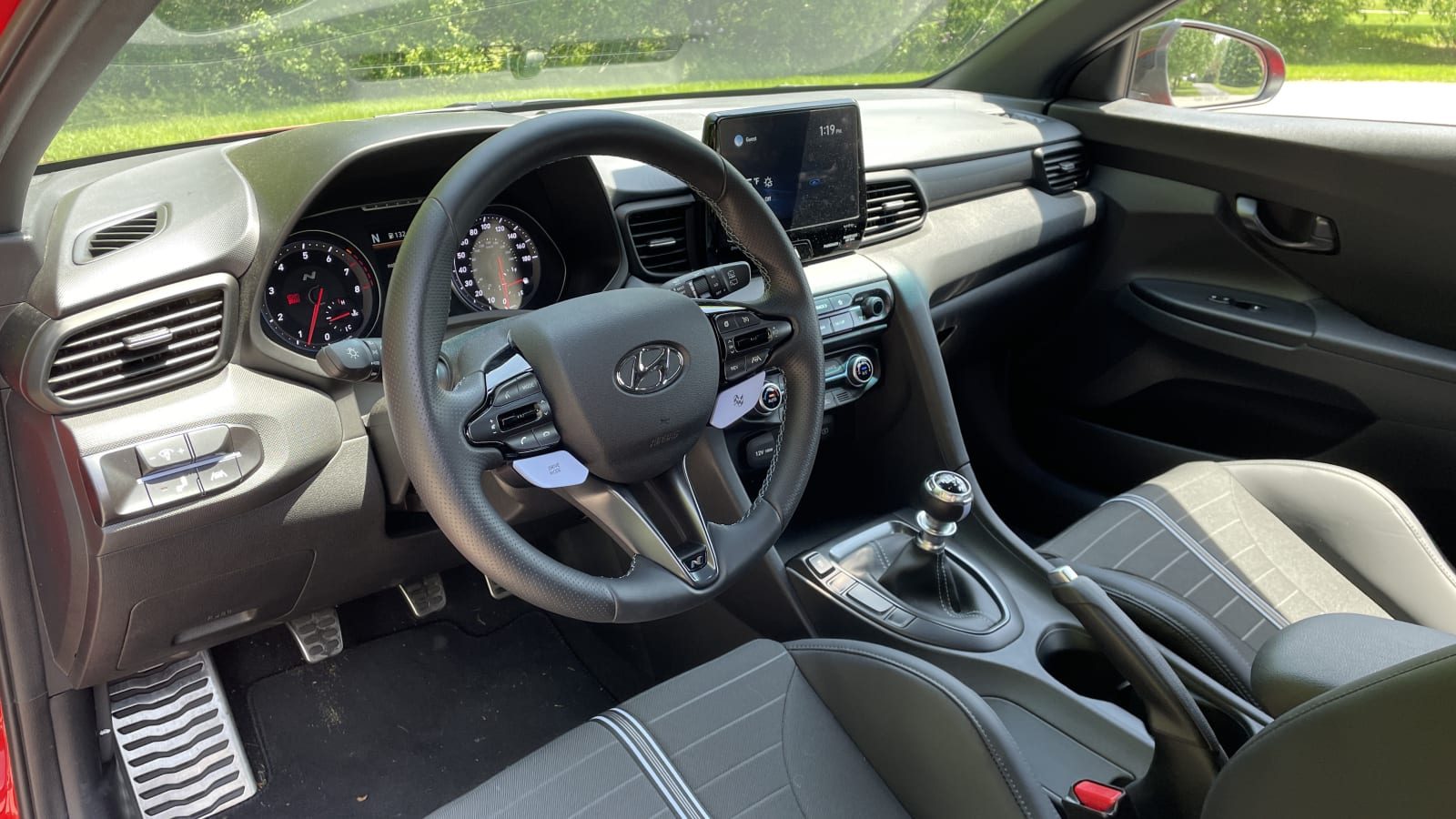 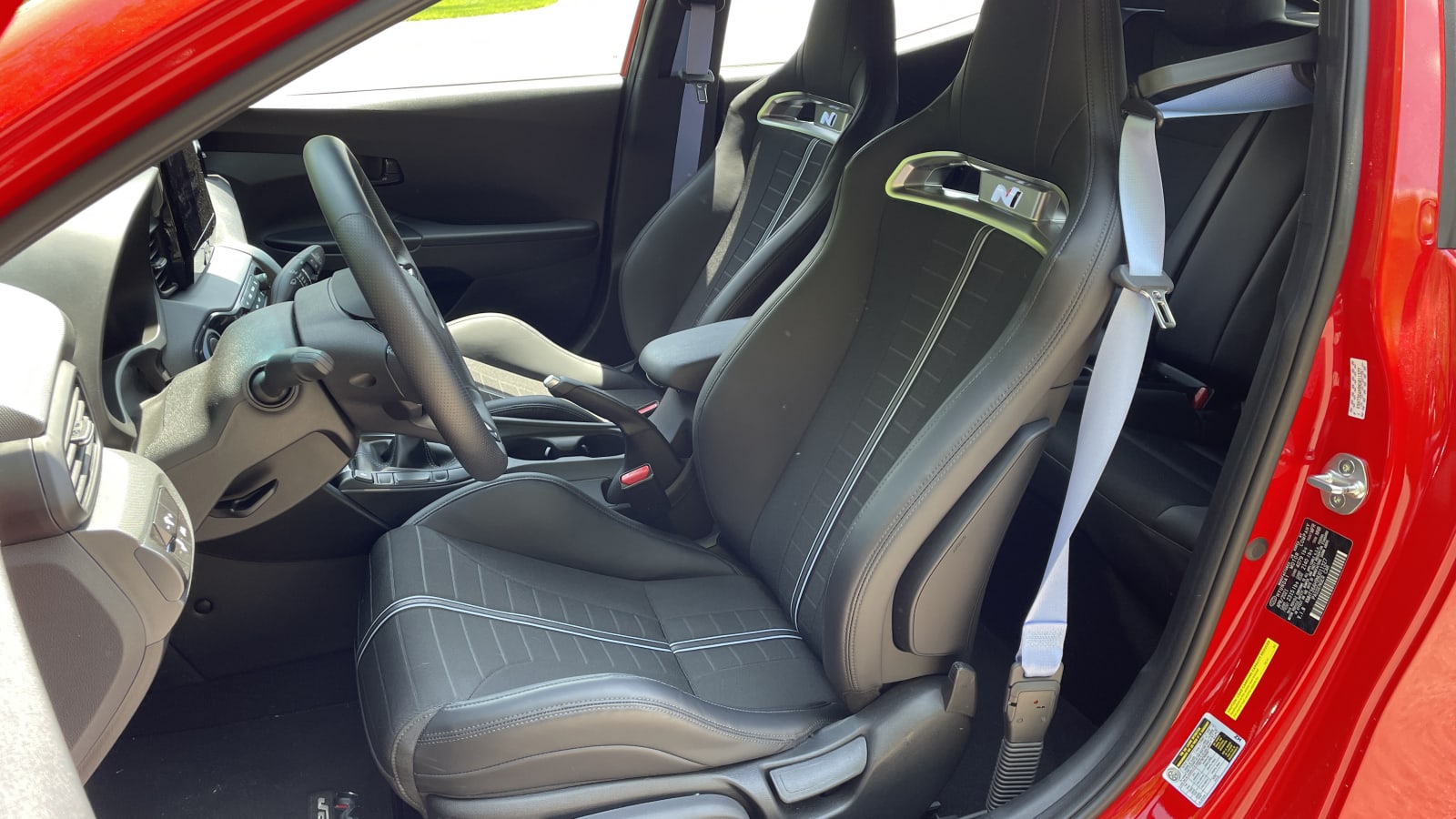 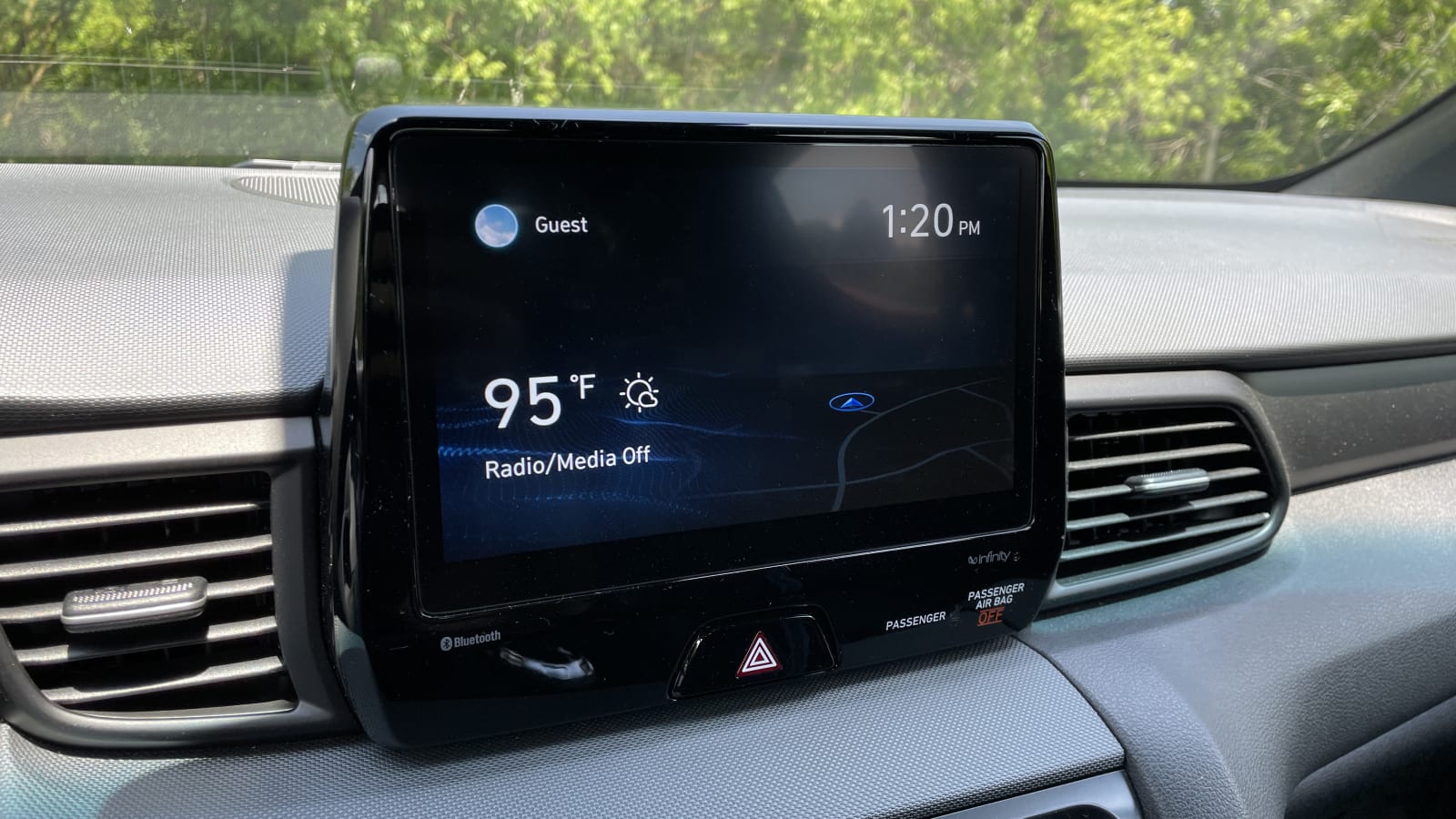 Finding anything to complain about when it comes to driving the Veloster N is just as difficult as it was back in 2019. The 2.0-liter turbocharged four-cylinder motivates this 3,106-pound hatchback with all the kick it needs. Its 275 horsepower and 260 pound-feet of torque leaves the front end scrabbling for grip when the Pirelli P Zero summer tires are cold, but get them warm, and this little monster will scream away from a dead stop in just over 5 seconds per Car and Driver testing.

The noise it makes getting there is arguably more entertaining than the acceleration itself. Assuming you have the exhaust in its most aggressive setting, each shift is accompanied by a rapid-fire bang bang before you step back onto the throttle, reawakening the bass-filled roar of the boosted engine. There’s no form of noise left out of the equation. No matter what you want, whether that’s the sound of a turbocharger or screeching rubber from a massive front-wheel burnout, the Veloster N can provide the desired atmosphere. We’d say that we’ll miss the noises the most, but thankfully, a similarly noisy experience can be had in the other N models on sale now. 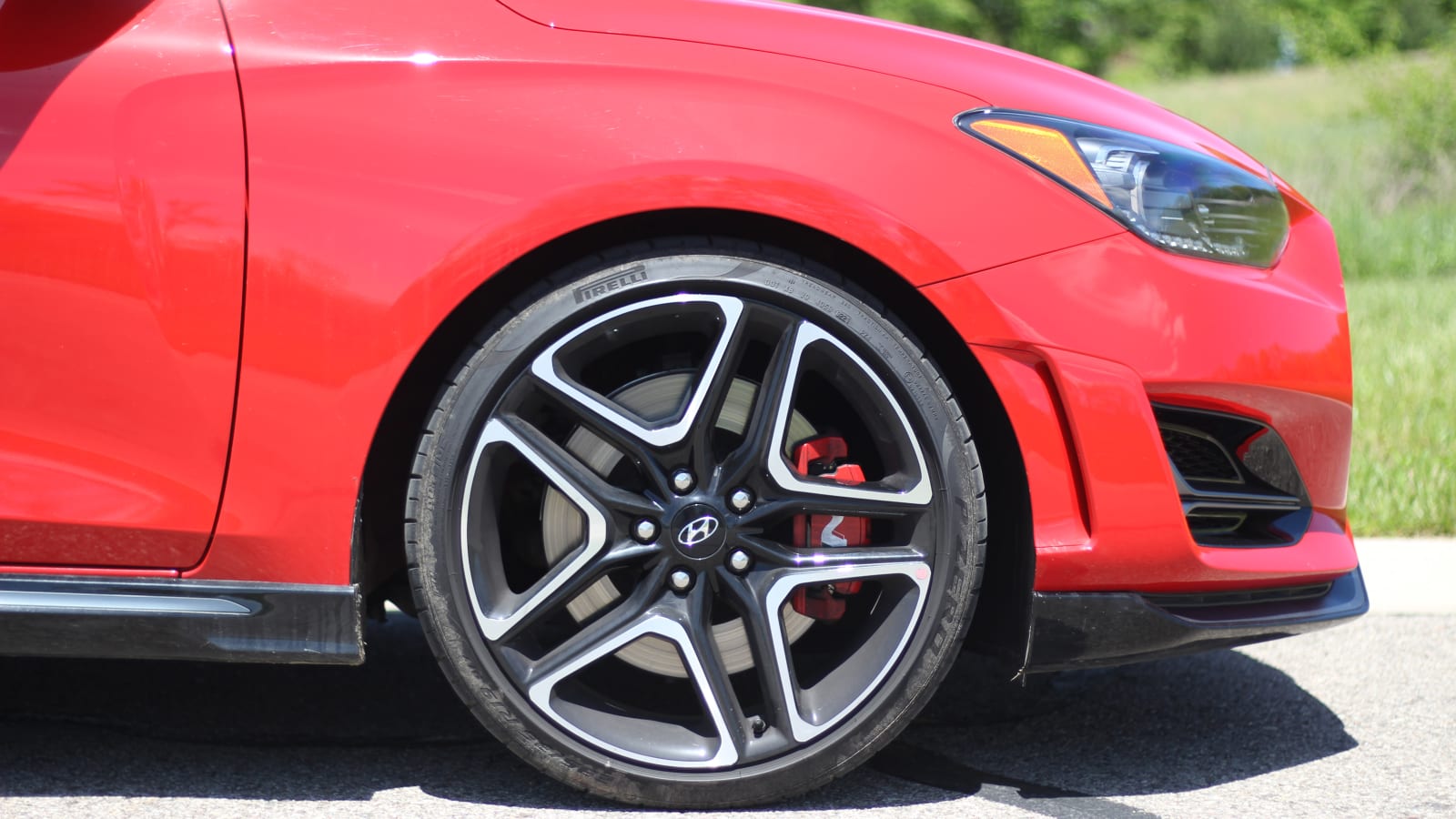 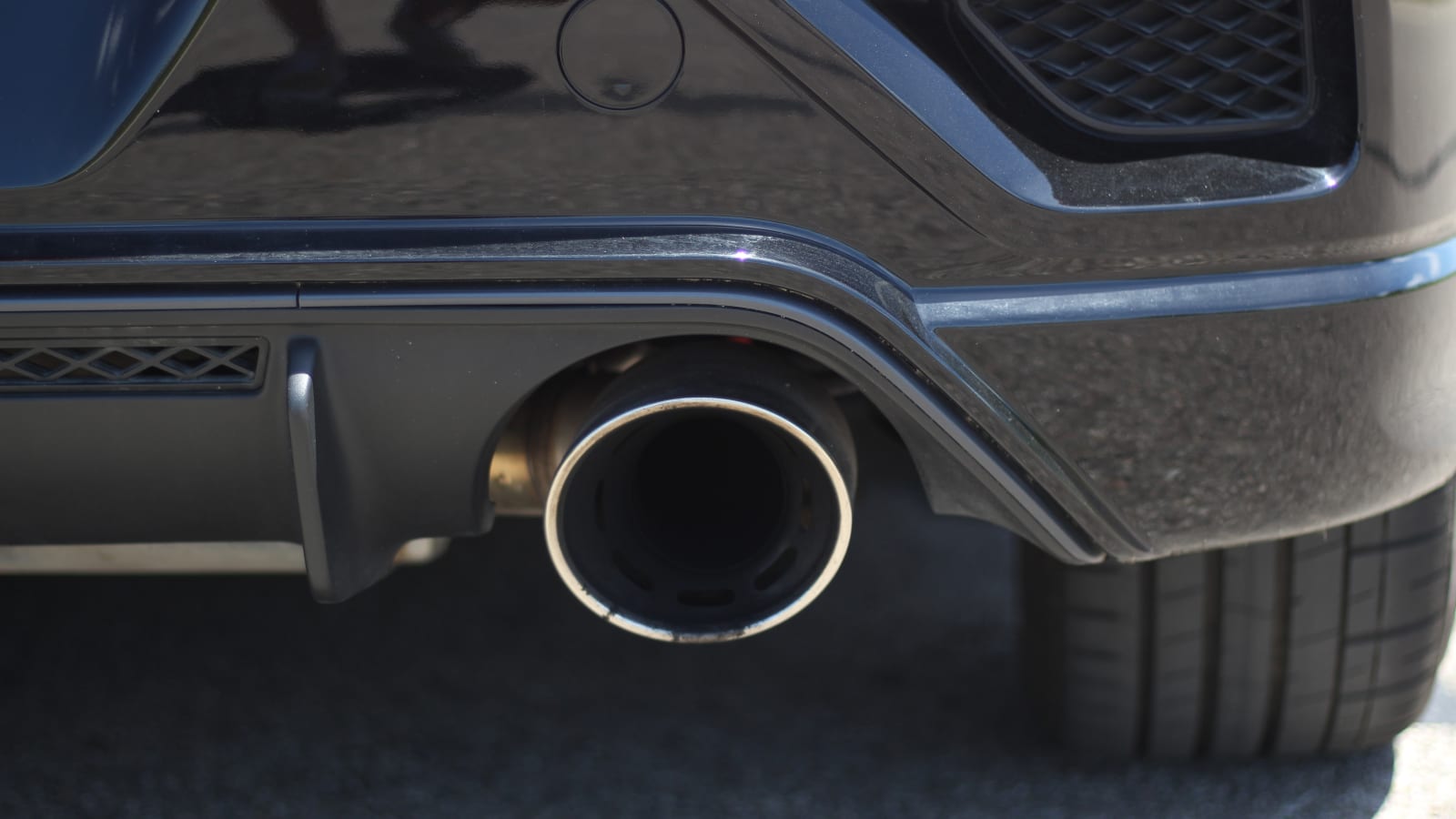 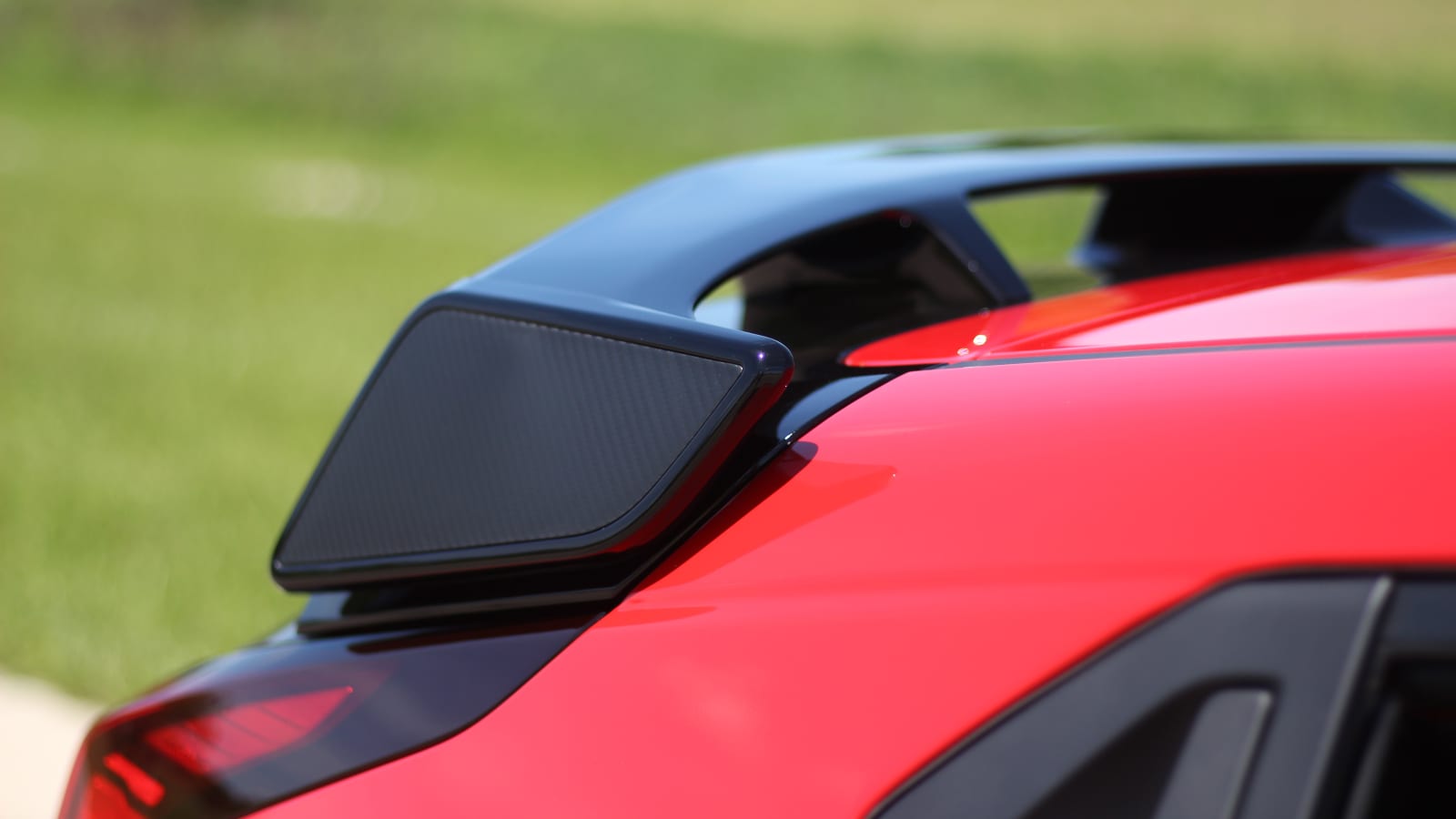 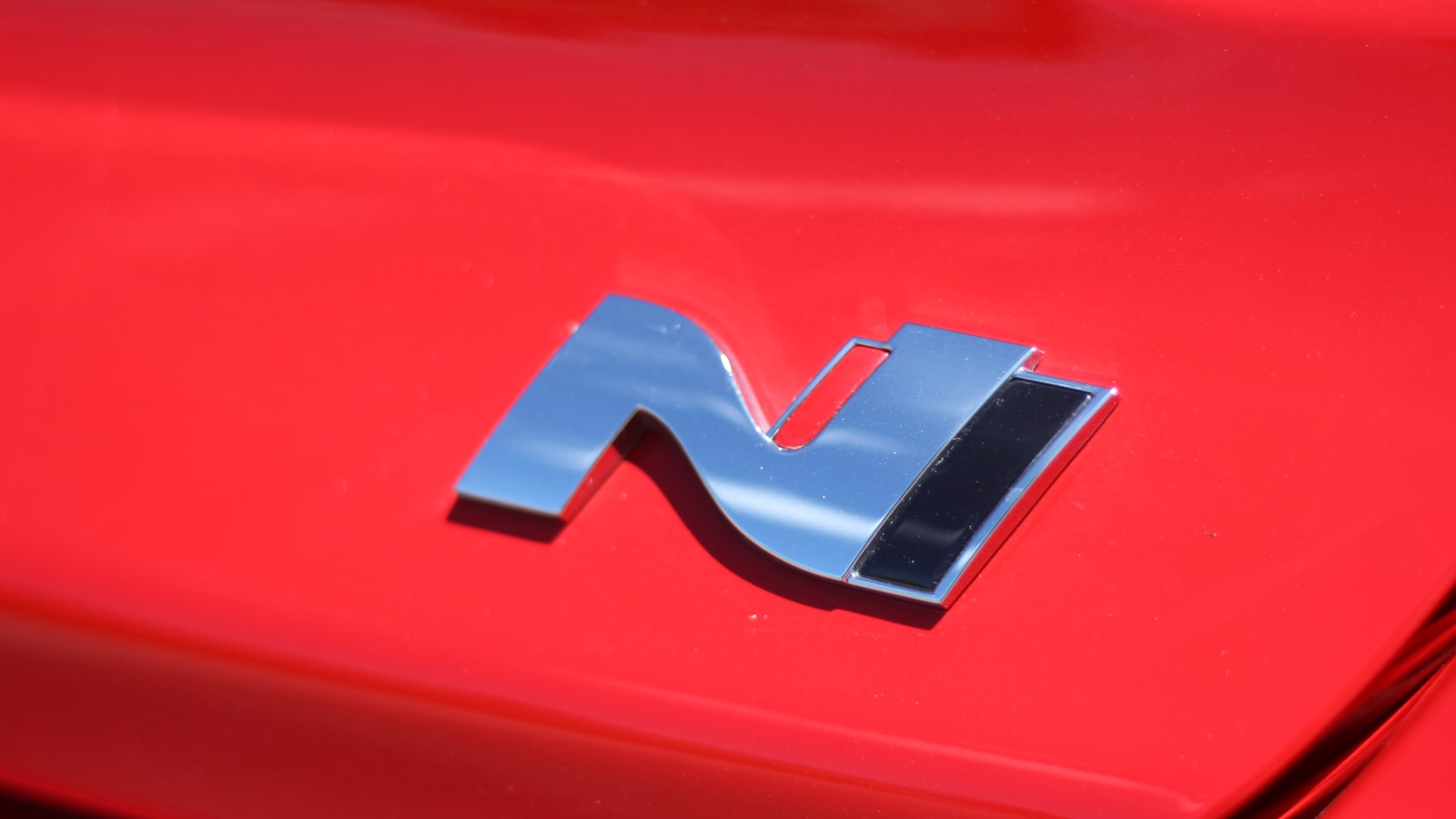 The Veloster N notably sits in stark contrast to other hot hatches that are far more subtle when it comes to external audio, such as the Volkswagen GTI or last-gen Honda Civic Type R. The Hyundai can be quiet like those cars if you stick it into “Normal” mode, but what’s the fun in that?

Thankfully, the Elantra N will pick up where the Veloster N leaves off when it comes to handling performance. That said, even four years later, the Veloster N is an absolute riot to chuck around. The previous-gen Civic Type R set the world standard for handling in front-drive cars, and the Veloster N is nearly at that same level. Hyundai’s electronic limited-slip differential works its magic to make sure torque is effectively distributed to the ground, sling-shotting you around corners with shocking pace and inspiring huge amounts of confidence. It’s possible to induce a little torque steer — unlike the Type R — but the Veloster N does a bang-up job of tempering it and allowing the driver to maintain full control of where those front wheels are pointing. 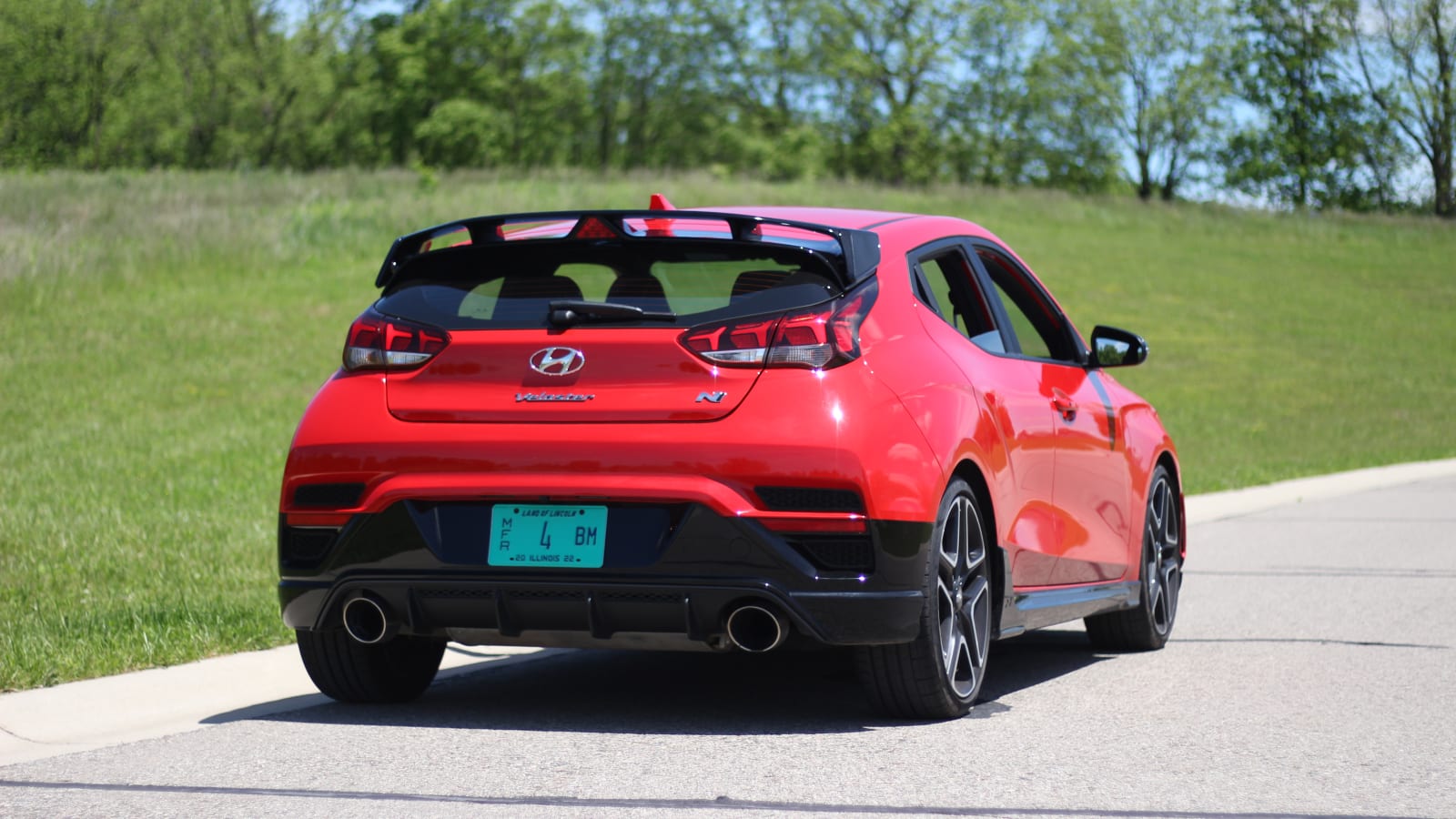 The presence of a “Custom” drive mode that allows you to set everything up exactly as you want is a huge boon to both enthusiastic and daily driving. Twisted up to full “N,” the suspension is rock-hard to the point of being a burden on all but the smoothest of roads. Being able to soften the dampers but keep the childish exhaust and weighty steering means you can have fun any time you hop in the driver’s seat. The rev-match function is greatly appreciated under all circumstances, too. Step through each gear as you brake for a light, and every downshift is accompanied by a timely blip with accompanying chatter from the exhaust. You can drive around and be a nuisance to society as much as you want, all while enjoying a reasonable ride quality.

Beyond the inarguable performance, the Veloster N’s weirdness is what we’ll miss the most. No, a car with three doors and a squished hatchback stature doesn’t make sense when you think about it from a utilitarian perspective, but the fact that it existed at all is something us weird nerds can be thankful for. Plus, on a serious note, we spent a weekend toting people around in the back seat of this Racing Red example, and the complaints were minimal. It’s a shame that only one of the rear windows goes down (the one in the door that opens), but rear legroom is plentiful so long as one of your riders accepts the need to scoot across the rear bench to get in and out. 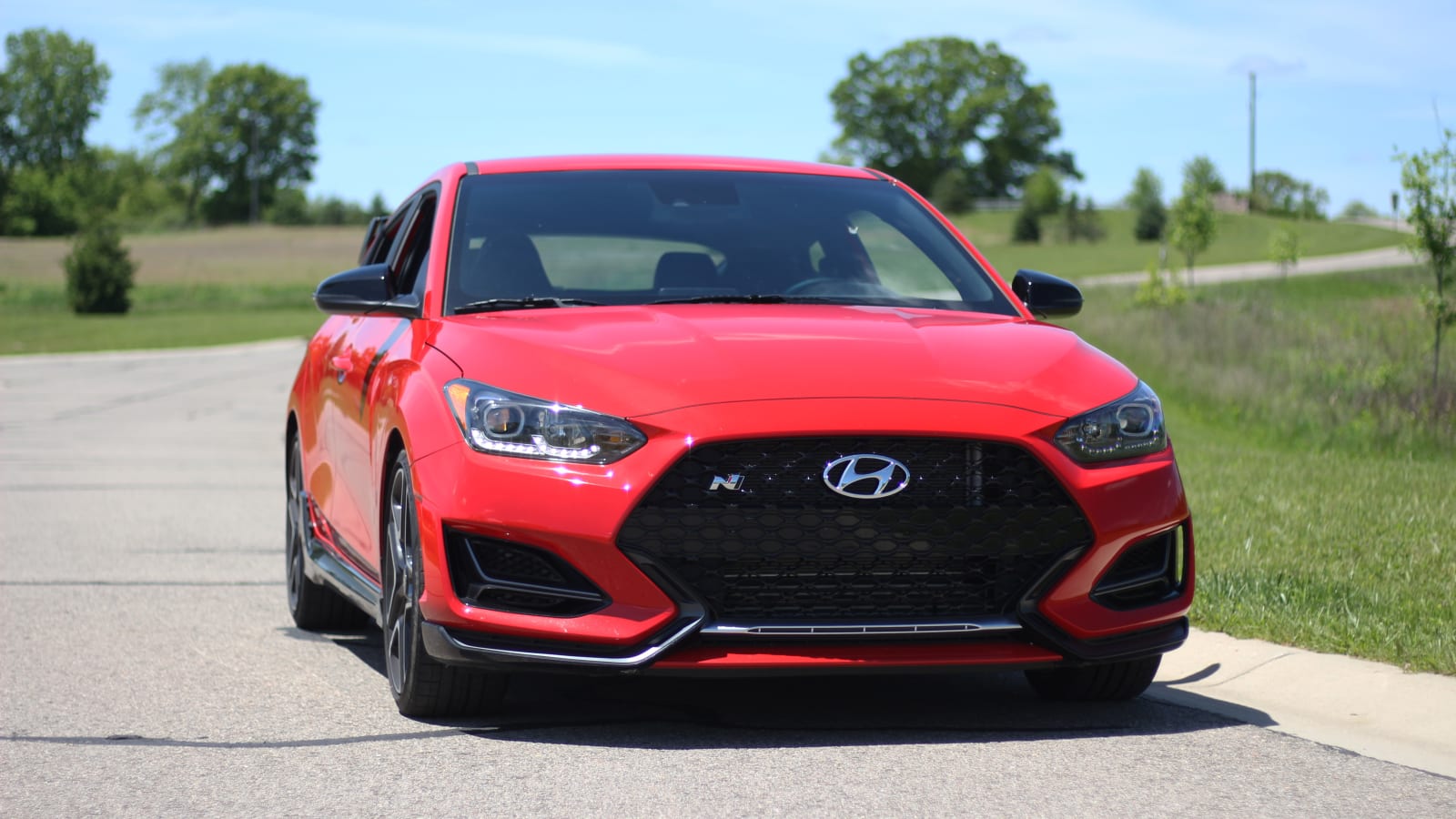 Don’t look at this “Final Drive” as you completely missing the boat on the Veloster N, though. Hyundai will sell the little hatchback through the 2022 model year, so there’s still a chance to snag one. The price isn’t as enticing as it was when the Veloster N launched in 2019, but $33,595 is a reasonable amount to pay for its performance — add $1,500 to that if you want the DCT. Unfortunately, that price puts it above that of the Elantra N, which offers a nicer interior, better visibility and more utility with four full doors. You can see how pulling the plug made sense – not to mention that far more people buy regular, non-N Elantras than Velosters, making a low-volume, enthusiast special a more palatable business proposition. So there’s logic to the decision, but that doesn’t mean the Veloster N’s absence won’t leave a funky-shaped hole in our hearts.

In the end, the Veloster N did its job of fully entrenching “N” as something special to enthusiasts. It effectively set high expectations and laid the groundwork for every successive N model to succeed in its place. Now, Hyundai just needs to keep the drumbeat going.